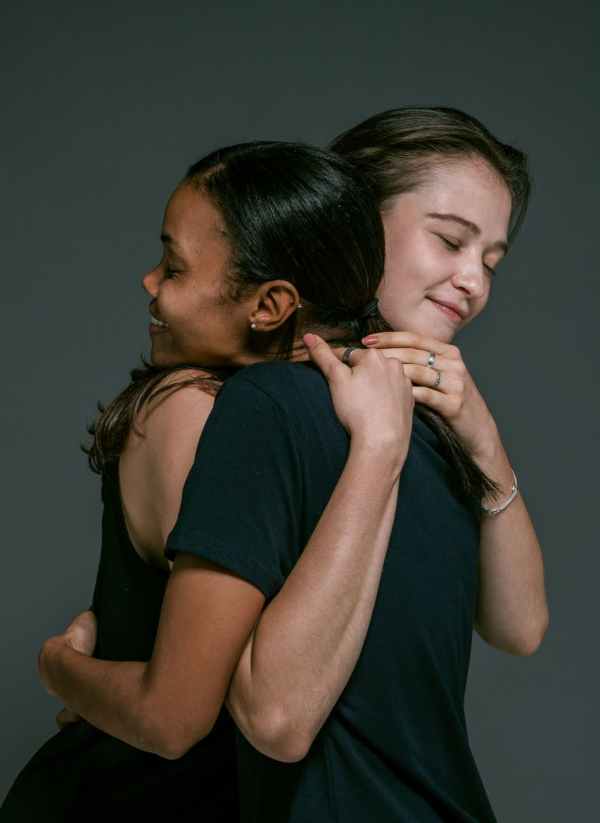 Why do we find it so difficult to be reconciled? We crave God’s forgiveness, but we withhold our own toward our neighbors, or family members. We let anger and bitterness keep us apart. We let pride keep us from doing what we know is right in God’s eyes.

I speak from conviction. I have been estranged from a cousin of mine. Years have passed since we’ve spoken. We argued about something, and simply stopped talking. I tell myself that I have nothing for which to apologize–that’s just the way things ended. And my life is far less stressful since we’ve stopped talking. I do not “hate” my cousin, or feel bitter toward her. In fact, I tell myself that I only wish her the best– I just don’t want to be involved in her life, or have her involved in mine.

I know this is not what God wants. I know I should get in touch, and reassure her that “we’re okay”. Yet I am afraid to reach out and re-establish contact. Not because she poses any sort of physical threat, but she threatens my pride and my comfort. I find her difficult to talk to; difficult to understand. We have different ideas about boundaries and expectations–I find her “needy,” and she finds me “aloof.” I don’t think time will have made our relationship “easier.”

But God finds her precious in His sight– and worthy of my effort to reconcile our relationship. That doesn’t mean that I must allow her to manipulate me or abuse my emotions, or that I must demand that she be someone she is not to make me more comfortable. But it does mean that I may be embarrassed or inconvenienced at times. I need to be willing to listen, even when it is difficult, and so speak, even when it seems like I’ve said the same thing before. And it means that I must learn to set healthy boundaries and insist on them– not to shut her out as I have been doing, but to keep our relationship balanced and safe for both of us.

God puts a great premium on our willingness to be reconciled to one another. So much so, that Jesus told His listeners in the Sermon on the Mount, that if they were ready to bring an offering, and they remembered that someone had something against them, that they should leave their offering– unoffered– and go be reconciled first. Being at odds with others puts us at odds with their Creator and the One who loves them. Whenever possible, we should seek to reconcile. Broken relationships are sometimes a reflection of our relationship with Him. It hinders our prayer life, as well as our witness to the Power of God to redeem and reconcile the world around us.

God is aware that we are sinful people. And there are some relationships that are absolutely toxic. Reconciliation and forgiveness are NEVER about allowing another person to continue to abuse or manipulate you. Especially if this involves physical or sexual abuse. Forgiveness is not the same as accepting someone else’s manipulation or abuse. God, and only God, can redeem us and make us a new creation. Some relationships cannot be fully “reconciled” in this life. But “letting go” is not the same as “locking out” or “running away.” We must let others know that God can do what we cannot–He can restore broken relationships. He can make all things new.

In the last post, we looked at how Jacob worked for 20 years for his corrupt father-in-law. Jacob has changed from the scheming young man who cheated his brother, lied to his father, and was sent away for his own safety. But that’s not the end of the story…

After 20 years of keeping Laban’s flocks, establishing his family, playing referee to his squabbling wives, and dealing with Laban’s greedy and capricious nature, Jacob is ready to leave. But we have a couple of curious incidents yet to explore in this relationship. In Genesis, chapter 30 https://www.biblegateway.com/passage/?search=Genesis+30%3A25-43&version=NIV we are given a detailed plan by Jacob to develop and increase his flocks. Jacob outlines part of his plan to Laban, and Laban agrees. Jacob’s flocks will be speckled and spotted, while Laban’s will be “pure.” On the surface, it looks like Laban is getting the better end of the bargain, and, as Jacob points out, there will be no way he can “cheat” by claiming Laban’s animals as his. But Jacob’s plan has a couple of twists and turns.

As Jacob follows his plan, he ends up with the strongest and best of the flocks, while Laban’s flocks are weaker. Once again, Jacob uses a clever scheme to advance at the expense of someone close to him. At the beginning of chapter 31, we see the result– Laban and his sons are angry and resentful– they feel they have been cheated, and plan to retaliate. Jacob leaves in the middle of the night with his wives, children, and livestock, planning to return to his father in Canaan. Jacob explains to his wives that his “plan” was inspired by a dream in which God told him what to do to increase his flocks and then told him to return home. https://www.biblegateway.com/passage/?search=Genesis+31%3A4-13&version=NIV

But is Jacob telling the truth? Has he really changed, or is this just another case of Jacob using his wits to get what he wants?

The Bible doesn’t give us direct confirmation, but indirectly, the story seems to back up Jacob’s statements. Though the Bible says that Jacob “deceived” his father-in-law by sneaking away in the night, and not telling him that he was going, it never says that he deceived Laban by separating the flock as he did, or by preparing to return to Canaan. Furthermore, when Laban pursues Jacob, God warns him in a dream to say nothing to Jacob (advice he quotes, but doesn’t actually take)! Laban also confessed (back in chapter 30) that, via divination, he has learned that he was blessed on account of Jacob.

Why am I taking time to dissect this relationship between Jacob and Laban a second time? What else can we learn from this story?

Laban was not only Jacob’s father-in-law– he was also Jacob’s uncle. They shared similar character traits– both were ambitious, clever, and driven to take advantage of any “edge” that might be to their advantage. God did not “choose” Jacob because of any of this– but neither did he condemn him for any of it. Instead, God appeared to Jacob, and Jacob responded in awe, worship, and obedience. God didn’t change Jacob’s nature; his drive to succeed, his innovation, his ambition. But he did change Jacob’s heart–Jacob didn’t leave his uncle in ruins, in spite of the treatment he and his family (Laban’s own daughters and grandchildren!) had received. Jacob used his cleverness to build a strong flock, but he also used it to prove to his uncle that he was not the liar or thief he had been labeled back in Canaan. Jacob listened to God in formulating his plans– both his clever plan to build the flock, and the plan to return home.

Laban, on the other hand, had seen the hand of God at work blessing him on account of Jacob. Years before, he had seen the hand of God leading his sister, Rebekah to be Isaac’s wife. He had seen how God had blessed his daughters. He even saw that his ill-treatment of Jacob, Leah, and Rachel led to a loss of God’s blessing. But at no time is there any evidence that Laban ever acknowledged God, worshiped Him, thanked Him, or obeyed Him. https://www.biblegateway.com/passage/?search=Genesis+31%3A14-55&version=NIV

In their final encounter, Laban accuses Jacob of theft and duplicity– Jacob confesses that he fears Laban, but then, he gives him a blistering rebuke. Laban’s response is a feeble argument that all Jacob has belongs (or should belong) to him– Laban! “All you see is MINE” (emphasis added). He also claims (even after God tells him to say nothing to Jacob) that he has the power to hurt Jacob. Laban is a controlling user– a bully and a manipulator. Laban is a powerful man who is ruthless in using that power to get what he wants. But all that power is not enough to challenge God– the same God who blessed Laban because of Jacob; the same God who warned him not to act against Jacob. The real power does not belong to Laban or to Jacob. Jacob has been learning this lesson–Laban never will. The most he learns is that Jacob will no longer be under his control and submit to his corrupt authority.

Perhaps you have been in a relationship with someone who is controlling and manipulative. Perhaps they have convinced you that they have all the power to keep you enslaved to their manipulation. There are two essential truths you need to remember:

And keep praying to the “God of Jacob!”