Good Friday is a stumbling block for many people who would be Christians.  Some get angered at the mere mention of “Good” Friday.  They see nothing good in it, and no reason to celebrate.  They mock Christian celebrations and practices throughout Holy Week.  They ask, “What could be good about being arrested, beaten, tried in an unfair court, mocked, and condemned to death?”  “What could be good about celebrating someone’s final meal, and following the gruesome details of his humiliating crucifixion?”  “Why remember someone being tortured by his enemies and abandoned and even betrayed by his friends?”  I know someone who uses the crucifixion of Jesus as “proof” that God is neither omnipotent, nor holy.

Yet the Bible chooses to focus time, detailed description, and several varying viewpoints to make this the pivotal event (along with the resurrection) of history.  The Crucifixion does not come as a sudden and inexplicable episode in Jesus’ ministry. He predicts it; not just once, and not just in one account–he doesn’t hint vaguely at some “future trouble,” or potential danger–he gives a detailed description of what will happen to him:

33 saying, “Behold, we are going up to Jerusalem, and the Son of Man will be [a]delivered to the chief priests and the scribes; and they will condemn Him to death and will [b]hand Him over to the Gentiles. 34 They will mock Him and spit on Him, and scourge Him and kill Him, and three days later He will rise again.”

6 He is not here, but He has [a]risen. Remember how He spoke to you while He was still in Galilee, 7 saying that the Son of Man must be delivered into the hands of sinful men, and be crucified, and the third day rise again.”

Why do we need Good Friday?  Why, my acquaintance posits, does a loving God make salvation contingent upon the death of himself in human form?  Is it that God is incapable, or unwilling to offer “unconditional” grace?  After all, does he not offer “unconditional” love?  Why must salvation be achieved only by the unjust death of a perfect being?  Why must reconciliation and new life be forged in suffering and death?

These are not unreasonable questions, but I think they miss the broader picture.  Before the cross, before the scourging and the betrayal, let’s look at the life of Christ.  Jesus, the second person of the Trinity, the author of creation, could have stepped out of Heaven at any moment, and arrived in all his glory, surrounded by angels, to walk in pomp and dignity through the world he created.  He could have swept the entire Roman Empire off the face of the planet, healed every disease with a whisper, and lived in the Temple in Jerusalem as the Ruler he is.   Instead, he came as a helpless child, born to a teenage mom and her fiance during a grueling tax season.  He grew up in relative obscurity, never attended college, and is lost to history until he begins his second career as an itinerant rabbi at age 30.  He never held political office, never owned a home of his own, never wrote a book, or produced a piece of art work, never led an army into battle, never married or had children, never became wealthy, never did anything to make himself famous by worldly standards.  He was not crucified because he posed an actual threat to the Roman occupation of Jerusalem, but because he was accused of blasphemy by not denying claims that he was the promised Messiah of Israel.  His only “claim to fame” was that he was a dynamic teacher and had performed miraculous healings.  By almost every worldly standard, his life was a failure and a lesson in wasted potential.

His death is in keeping with his humble life.  It strikes us as a failure– humiliating, unjust, anti-climactic.  A life of servitude, poverty, being misunderstood, and making all the “wrong” friends and enemies.  Why would God live such a ridiculous and unfulfilling life?  Except he didn’t– it wasn’t a failure; his life and death stand as examples of how to live at peace, and how to change the world!  Hundreds of people flocked to hear him teach; hundreds more to see him heal the sick and raise the dead.  But he never charged a single coin, never demanded accolades or even thanks. 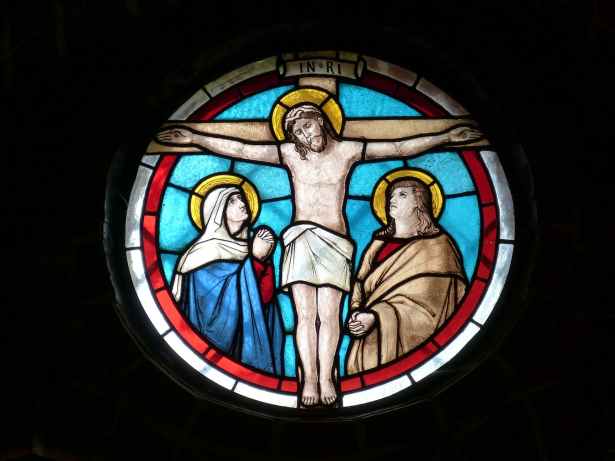 This is the paradox of the Gospels.  God’s ways are not our ways.  His humiliating death on the cross was necessary for the ultimate triumph of the resurrection, but it was more than that– it was a vindication of justice over injustice and service over selfishness.  Good doesn’t always triumph over evil in a power play.  God has the power to obliterate every one of his enemies, but more often than not, he causes them to fall by their own arrogance and blind ambition.  The Chief Priests, the Roman Soldiers, the agony and torture of death– they were no match for God’s love.

Good Friday showed us that God can ALWAYS make even our most difficult circumstances, even the worst situations, into something VICTORIOUS.  Jesus still had to suffer and die, because we will still have to face betrayal, hatred, injustice, unanswered questions, and even taste death.  An Easter without Good Friday is a happy ending without the story.  Only an omnipotent God could have given us the triumph; only a loving God would have walked the Via Dolorosa to fight in the trenches with us.